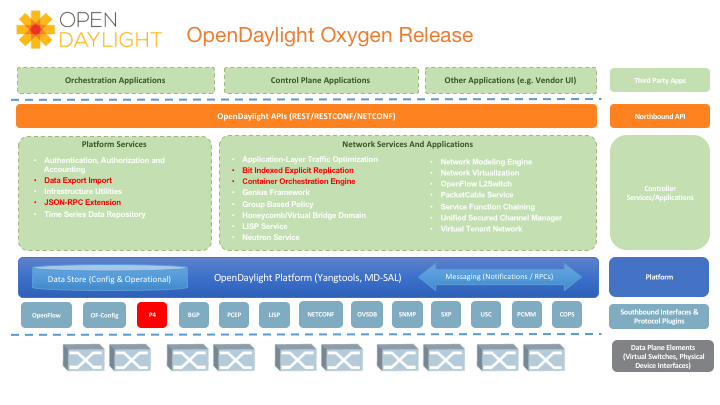 Oxygen introduces a P4 plug-in for the platform, increasing its value for key market segments, such as carriers and large cloud providers, who have embraced data plane abstraction. The P4 community, now part of the ONF and Linux Foundation, represents over 60 companies, many of which are also OpenDaylight users and contributors.

The Container Orchestration Engine project introduces a plug-in for Kubernetes as well as development of Neutron Northbound extensions for mixed VM-container environments. This is a first step in a longer-term effort to support container-based workloads as well as provide management tooling for container networking itself.

At the top end of the stack, as the platform has matured and become a key upstream component of other solutions such as ONAP (as the SDN-C) and OPNFV’s Virtual Central Office (vCO), the developer team has increasingly focused on release efficiency via architectural and process enhancements. The implementation of Karaf 4 in Nitrogen was a first step in that process.

With Oxygen, OpenDaylight begins the move to a “managed distribution” model, which decouples non-core projects from the main release process and allows them to evolve at their own pace. Meanwhile, core, centrally “managed” projects benefit from close monitoring by the community for health, impact on overall platform stability, and timeliness of meeting release milestones. This evolution will continue with the next ODL release (“Fluorine”).

What makes a project “managed” vs “unmanaged”?  Managed projects are those critical to platform stability and include the following:

Non-core projects may be inactive or embryonic, desire to operate on different release cycle, or are simply highly specialized in their applicability.

Since its formation in 2013, OpenDaylight has scored successes on many fronts. As the first major open source initiative in the networking industry, OpenDaylight helped introduce many organizations in the industry to a new way of working, and kicked off a major shift in how innovations are delivered, consumed and monetized. Over 35 companies now formally deliver OpenDaylight-based solutions, applications, professional services and training to hundreds of customers, and many others–technology providers as well as service providers–use components of the platform within their privately branded offerings.

By all indications, it is also the most widely deployed open source network controller, in networks supporting well over 1B end users. In addition to serving a critical role with major carriers such as AT&T, Bell Canada and Orange as well as OTT and media companies like Tencent and others, we hear periodically from the administrators of small POPs and local ISPs throughout Africa and West Asia. As a key component of ONAP and other higher-level frameworks, ODL is increasingly expanding its global footprint as network automation accelerates around the globe.