On Dec. 12-16, the ODL city tour workshop was sponsored by OpenDaylight,  China Open SDN Committee (COS), ZTE, Huawei, H3C, Cisco, VCMY and Raysystem, and hosted by Baidu, Tencent, Tethrnet and SDNLAB. It was held in four cities of China: Nanjing, Beijing, Shenzhen and Shanghai, all are within a week.

People from many technology companies joined and shared their experience in using ODL, the following slide is from Neela’s keynote, Neela listed top three companies for Internet, Telco and ICT vendors in China.  Internet companies, a.k.a BAT in China, are all members of COS and members of OpenDaylight, Tencent and Baidu are two of the four city hosts. All three Telco companies participated in ODL city tour and gave presentations. All the three ICT vendors were sponsors for this event. This shows a big enthusiasm for OpenDaylight in China. 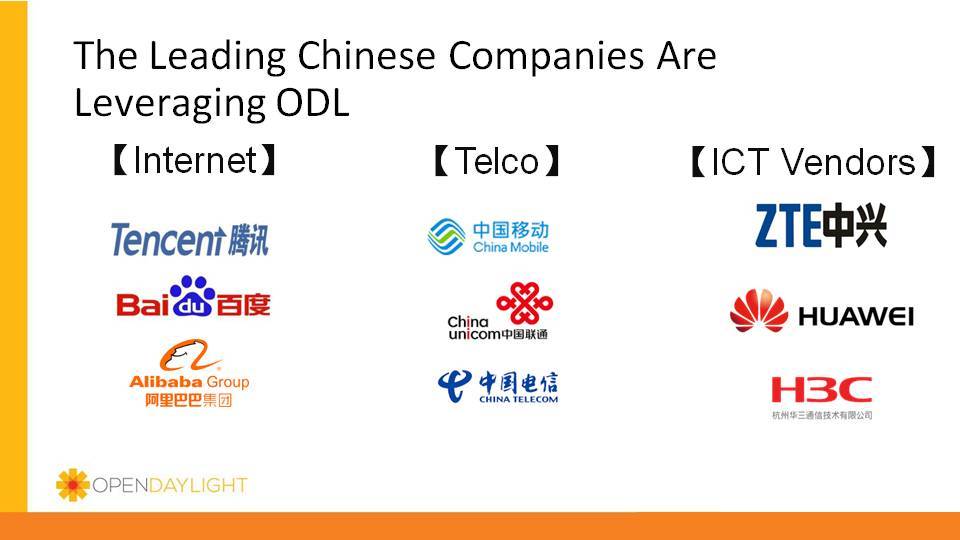 Let’s take a closer look at the three Telco’s  approaches of SDN controller.

According to China Mobile, after deploy SDN, the network is expected to be more open, more flexible and more efficient , it is true for the latter two, however, compare to traditional network, to many people’s surprise,  today’s SDN deployment makes network less open.

In traditional networking, following IP standards, gateway, switch, firewall can come from different vendors, but for today’s SDN to work properly,  equipment needs to be from the same vendor as SDN controller. China Mobile’s solution to prevent vendor lock in is to develop SDN controller by themselves.  The best way to build a SDN controller is based on open source,  China Mobile selected OpenDaylight platform to develop their own SDN controller – AERO. 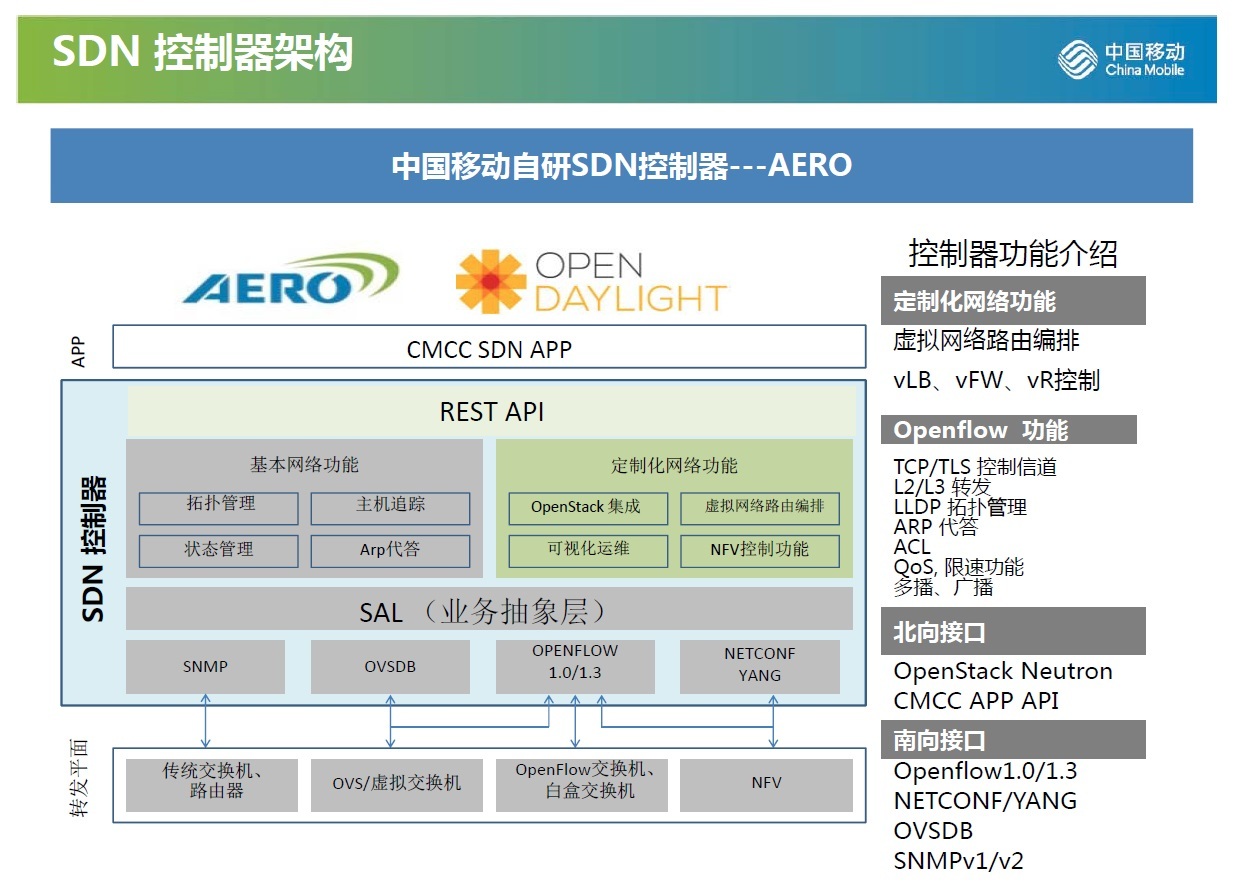 China Telecom gave a couple of use cases of how they leveraged OpenDaylight in their SDN controller; IP SDN & NFV on WAN and unified control/management for cloud/WAN. 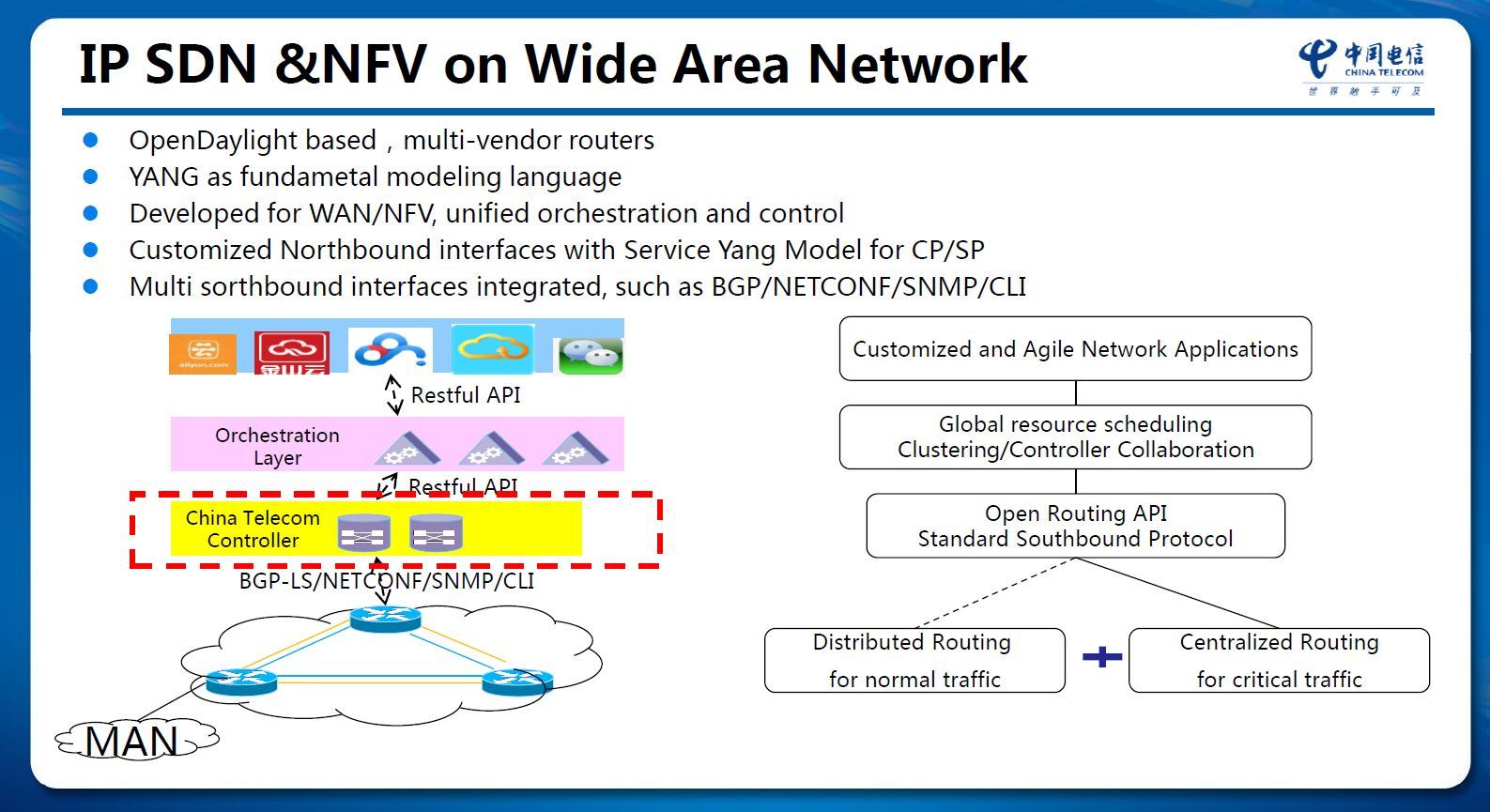 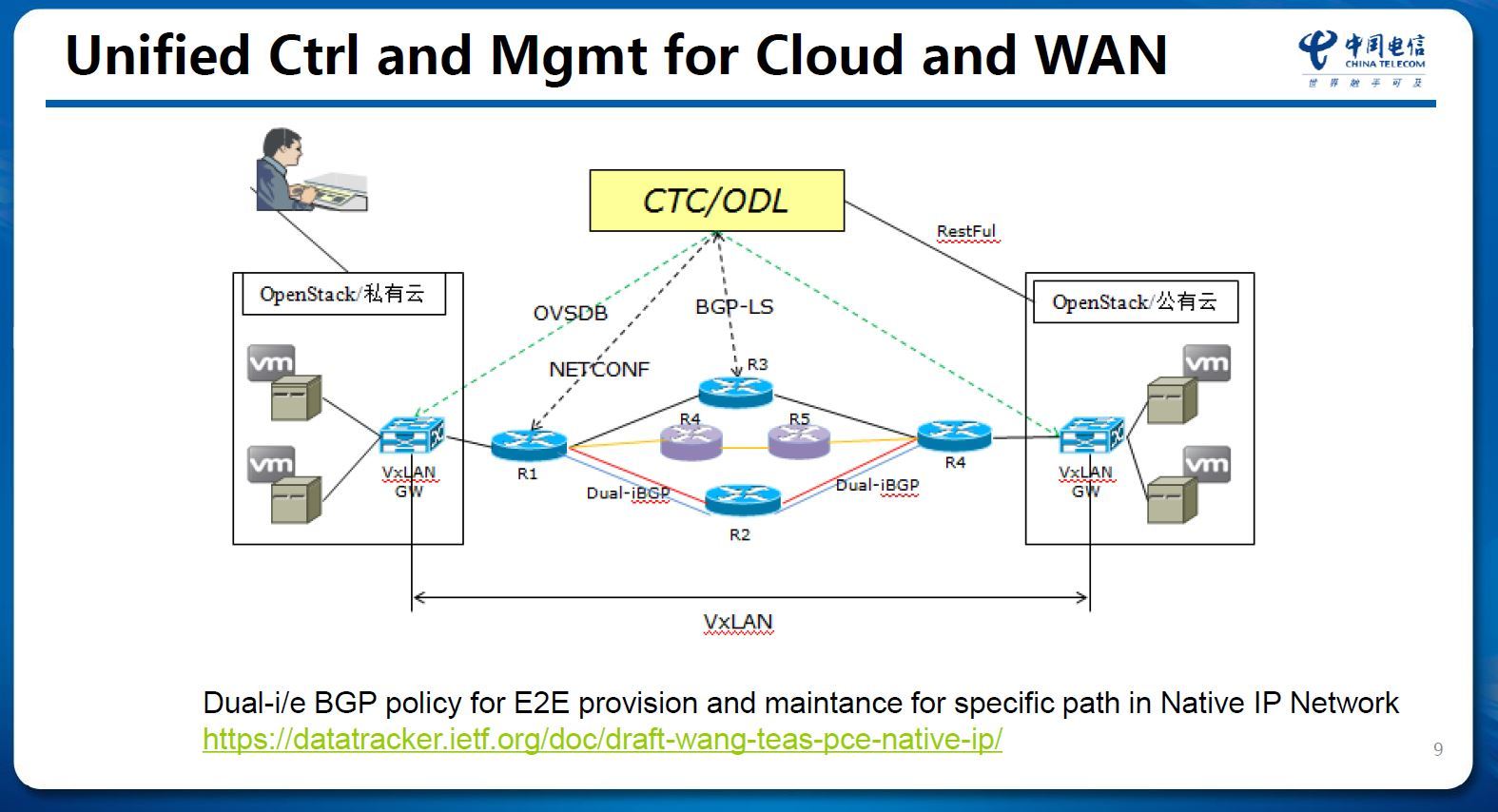 While China Mobile is emphasized on southbound, China Telecom concentrates on northbound service plugin and Yang model, they would like northbound to be more abstracted, and they would like to have Yang model to be standardized and more mature in ODL. Their expectations of OpenDaylight are not very different than most of others, enhance core, cluster and performance. 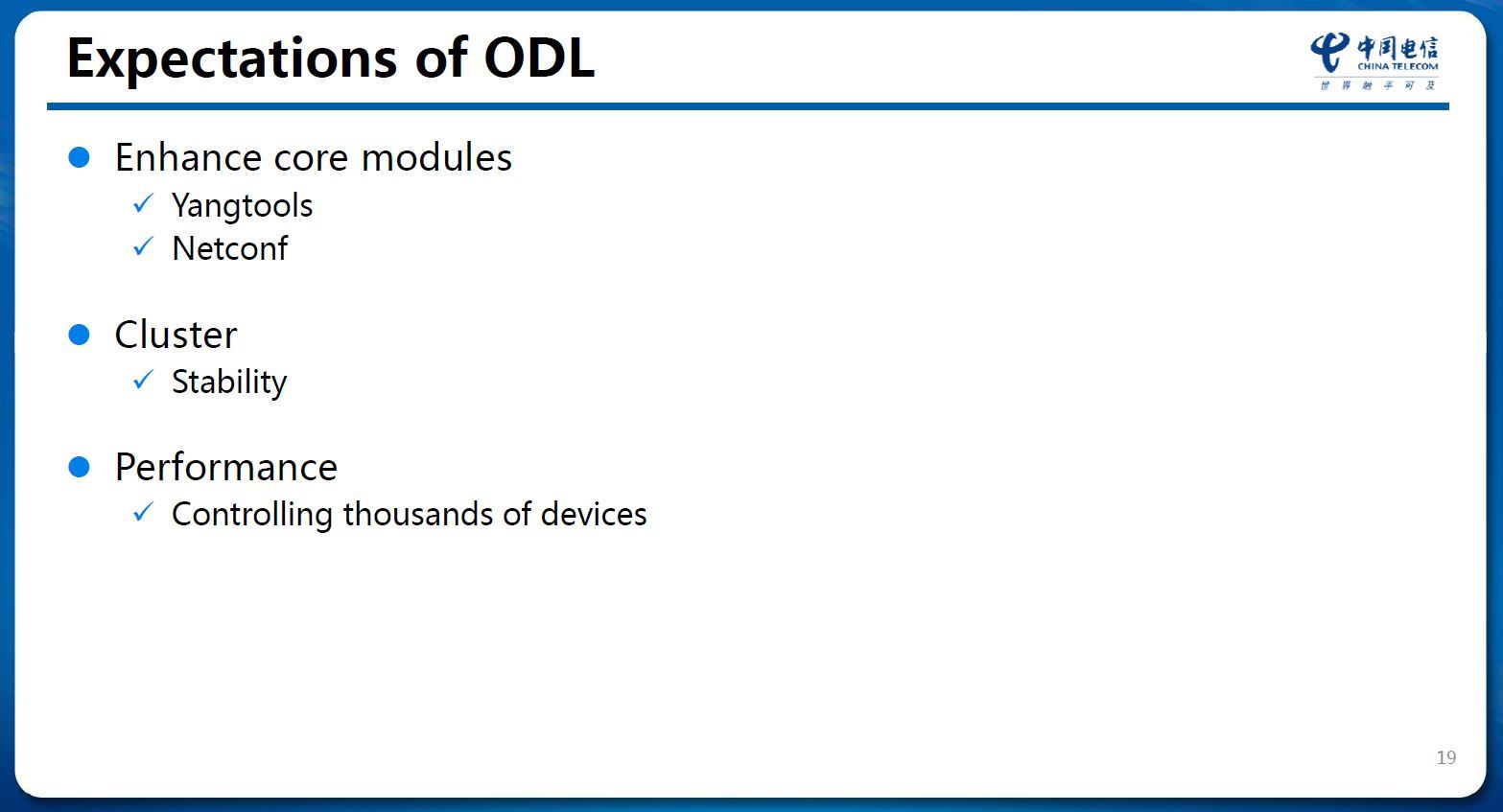 Fast and automatic deployment is the main motivation for China Unicom to adapt SDN/NFV. At Shanghai, China Unicom gave an presentation of  SDN requirements from China Unicom and Practice of ODL through A-Network. 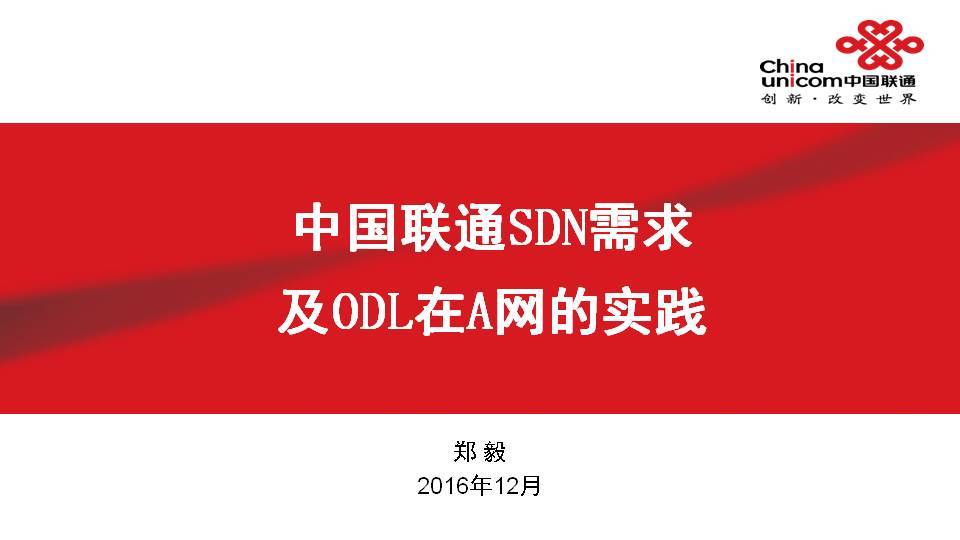 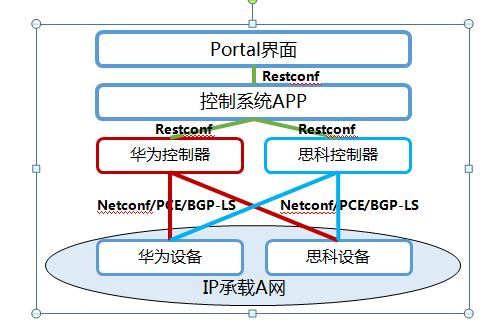 The controller in red box is Huawei controller and in blue box is Cisco controller, both controllers connects to their own equipment as well as other vendors equipment through Netconf/PCE/BGP-LS protocols. On top of vendor specific controllers, there is one control system, which controls controllers.

Clustering, YANG modeling, performance and stability are the common interests of almost everyone who participated the ODL city tour, we should combine the strength of community and members, to build a robust HA open source SDN platform that can be leveraged by many many companies and people.

At last, thanks again for organizers and sponsors for this ODL city tour event, it has been a huge success and we keep the momentum for fast SDN deployment.