How Orange is Using OpenDaylight 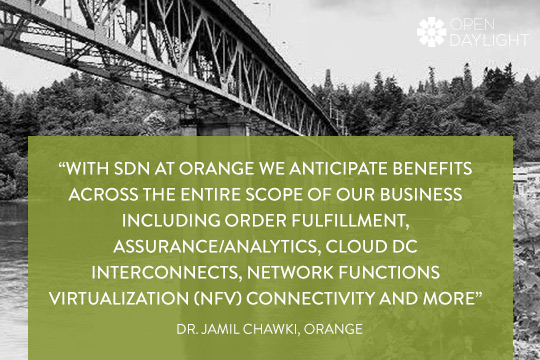 We at Orange have a long history of participating and contributing to open source communities and have been a leading supporter of open standards. As one of the largest global telecommunication operators, we provide a comprehensive range of fixed and mobile services to over 247 million customers in 29 countries. Since the launch of OpenDaylight in 2013 Orange has been an active participant in the community. Orange is also actively participating in OpenStack and is a founding member of OPNFV.

With SDN at Orange we anticipate benefits across the entire scope of our business including order fulfillment, assurance/analytics, cloud DC interconnects, Network Functions Virtualization (NFV) connectivity and more. There are several key opportunities that SDN could bring to network operators, first being the dynamic nature of the technology.

With SDN, operators can exercise dynamic control over network resources which can offer a host of benefits, not least of which is the ability to empower new consumer purchasing models for self-service and on-demand provisioning. While automation is important, it would do little good in overly-complex environments. Instead what SDN can do is streamline resource abstractions to hide complexity and simplify the overall solution.

There are a number of potential opportunities and use cases that SDN and NFV can positively affect:

In fact there are four key OpenDaylight proof of concept (PoC) use cases that Orange has been helping to develop and test as shown here: 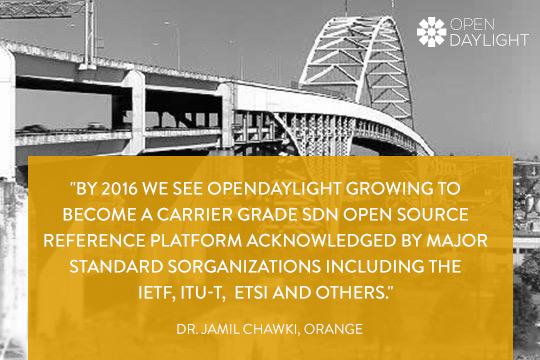 Our experience testing these use cases both from a technical perspective and also from our extensive operational and business model analysis has made us more excited than ever about the impact SDN and NFV will have. By 2016 we see OpenDaylight growing to become a Carrier Grade SDN Open Source Reference Platform acknowledged by major standards organizations including the IETF, ITU-T,  ETSI and others.

Open reference platforms are a new evolution upon earlier open source models. The history of open technologies has shown clearly that open source software only reaches commercial viability when there is a base of full-time developers that participate in creating the code. Many open source projects started with a small crew and grew to eventually need commercial support causing conflict in the community. Alternatively many open source projects come from vendors who want to be more open but still want to maintain control of their software project. Neither approach to open source is a good candidate to bring an unbiased reference implementation of a standard.

There have however been successes in several areas aligning standards bodies with open source platforms. This occurs when the open source project is designed from the onset with the specific goal of becoming a neutral reference platform for the industry. This is where we see OpenDaylight being very strong and very successful. Major standards bodies are now recognizing the powerful impact that open source can bring to standards efforts and are starting to formally recognize and work more closely with these communities. OpenDaylight is the ideal candidate and we hope they will continue to pursue ongoing alignment with standards bodies. Orange is glad to be an active part of the effort to create a common, open core for the community.

Orange participates and presents on open source and standards activities at nearly all industry conferences and will also be presenting “Provisioning VPNs on a Mixed Legacy and Virtualized Network Infrastructure with OpenDaylight and NETCONF” at the upcoming OpenDaylight Summit.

If you’d like to participate in our user series, please contact pr@opendaylight.org or give us a shout-out using the #OpenSDN hashtag.